Roger F. Peterson passed away on Tuesday, June 1, 2021, at Immanuel Hospital in Omaha at the age of 79 years after a brief illness, surrounded by family.

Roger was born October 26, 1941, at the Oakland Hospital in Oakland to Arnold and Hilda (Angster) Peterson. Roger grew up on a family farm east of Oakland, attended Mount Olive Country School and Oakland-Craig High School.  He was the youngest of 7 children.  In 1959, he joined the Army Reserves.

On September 17,1961, he was united in marriage to Elaine Johnson at the Elim Lutheran Church (Swaburg).  They were married for 59 years and had three daughters:  Kellie, Tracy, and Connie.  They moved to a farm north of Craig where he farmed with his father and brothers.  In 1964, he purchased a farm two miles north of Craig where he built his own home, raised crops and livestock.  He was on many boards including Co-op, Stauffer Seeds, First Lutheran Church, Oakland-Craig Schools and Craig Rural Fire & Rescue. He was very mechanically inclined and took electrical courses, so his was a favorite stop local farmers made for help with machinery issues. He was proud to be featured on the TV News Program “Farm Family of the Week”.  He had fun taking private pilot flying instructions and driving to surrounding states for cattle sales and vacations with his family.  During winters, he and Elaine often traveled to warmer states where they explored with friends.  He was proud to be from Nebraska and when traveling, he always wore his Nebraska cap to start up conversations and no one was ever a stranger for long.

He retired from farming, sold the farm in 2000, and built a home in Oakland where he hauled grain for coop/local farmers and took up woodworking and golf.  He also was an avid watcher of the stock market and loved monitoring his investments and going to casinos. He and Elaine frequently drove to visit their daughters in Arizona, Florida, and Georgia.

He was preceded in death by his parents, Arnold and Hilda; sisters, Carla, Lois, Norma, and Joanne; brothers, Bruce and Jim.

A memorial service was held on Saturday, June 5, 2021, 10:30 am at First Evangelical Lutheran Church in Oakland. Burial took place in the Oakland Cemetery, Oakland. In lieu of flowers, memorials  are suggested to the family for future designation. 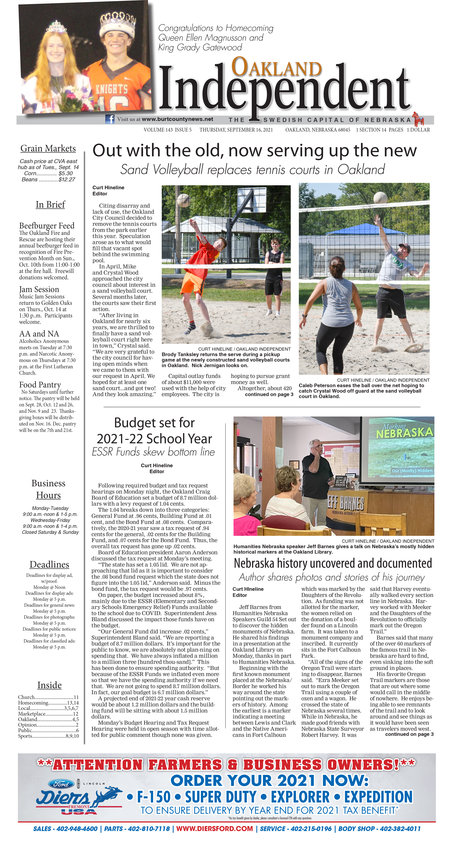